TOP
Topics
The differences between shrines and temples. Learn the differences that even Japanese people don't know!
Nov 10. 2019Topics

１ There are more Japanese temples and shrines than there are convenient stores! So, what is the difference between a temple and a shrine?

２ The difference between a shrine and a temple

As mentioned earlier, temples are built based on Buddhism, and shrines are built based on a different religion called Shinto. Temples are home to graves and are for mourning the deceased and making offerings to ancestors. There are also statues, such as Buddha, Amida, and Kannon and funerals can be held at temples. Shrines, on the other hand, are home to the Japanese gods Amaterasu Oomikami and Okuninushinomikoto, and distinguish the world where God lives from the world where we live. There is a gate entrance, or "torii", and unlike a temple, there is no mention of "death" and there are no graves or funerals.

Because the temple is a Buddhist facility, it is a place where people who believe in Buddhism visit and monks and priests are called "Obo-san" and "Ni-san". At shrines, there are Shinto priests, chief priests and shrine maidens who serve the Japanese God.

・The difference in names

Buddha's such as Dainichi Nyorai and Shaka Nyorai are enshrined in temples, such as "Horyu Temple" and "Kiyomizu Temple", but temples have different names and can be known as "XX jiin" or "XX iin", "XX daishi", "XX bo", "XX an" and many other names. Although the names are different, they all have the same meaning and mean temple.

Shrines also have an array of names and they are based on the name of the god that is enshrined. Famous places such as "Ise Jingu" and "Meiji Jingu", or any place with the name "Jingu" attached as well as the name "Taisha" such as "Izumo Taisha" are also shrines.

Since temples (Buddhism) and shrines (Shinto) are different religions and different places of worship, the manner of worship is different.

At a temple, the entrance gate is not known as a "tori" gate, but a "sanmon" and you enter by walking along a path. The threshold at the foot of the gate is not to be stepped on as you enter. Anyone can enter a temples where you will find bells you can ring as a greeting to the Buddha. You can also buy candles or incense sticks to use as an offering to the Buddha. When you stand before the Buddha statue, bow once, toss in a monetary offering and then ring the bells. After doing this, you should correct your posture and place your hands together in front of you as a sign of thanks. After giving thanks, bow once more. It is important to know that it is ok to clap at a shrine, but be aware that you should not clap at a temple. After you are finished with your visit, go down the main path to the entrance, exit the "sanmon" gate and bow again while facing the main building.

Before you enter a shrine, bow once at the middle of the torii gate at the entrance facing the path into the shrine. When you enter a shrine, there is a place where you can clean your hands and mouth, called a "temizuya" (also called a "chozuya"). A wooden ladle is provided so watch the people around you to learn the procedure or ask one of the staff members. At the shrine, first make a monetary offering (there is no set amount), ring the bell, and then give thanks by bowing twice, clap twice then bow once, in this order. When leaving the shrine, head to the main gate of the shrine, turn towards the shrine and bow once in appreciation before leaving. Depending on the shrine, the number of times you should clap may vary, so check the procedures according to the shrine you visit. When a shrine has a number of places where you can visit to show appreciation, you should start from the largest shrine.

As you can see, the procedures for worship differ between temples and shrines, and even at the same shrine, the manner of worship may differ, but even if you make a mistake with regards to the procedures, don't worry. Just don't rush yourself. People take worship quite seriously so your manners are important. 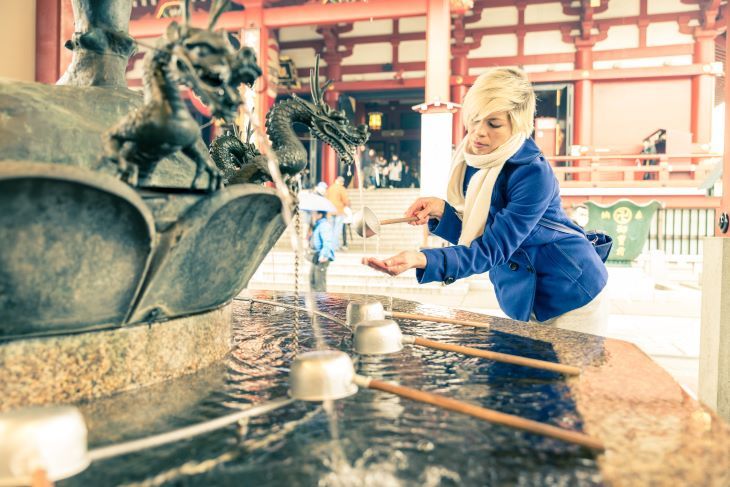 ３ Something to know that will impress! The popular "red stamp" book!

In Japan, the collection of "red stamps" at shrines and temples has become quite popular.

collecting these red stamps from the temples and shrines they have visited called "StampGirl".

A vermilion stamp is proof of your visit to a temple or shrine, and is stamped on a half of a page in a book with the date of your visit. In the past, temples would give out certificates as proof of your visit, but in recent years, a book was released that allows you to collect temple and shrine stamps and can be purchased from between 300 and 500 yen to collect stamps in.

In Japan, when the era changed from the Heisei era to the Reiwa era, people rushed to temples and shrines to get the last red stamps that shows the last Heisei era date, a stamp that will no longer be available after the change to Reiwa. Problems arose as there were too many people who wanted the stamp and some people tried to sell theirs at a high price to people who couldn't get their stamp. The lines were extremely long and people started to complain about the long wait. That being the case, some shrines stopped providing stamps because of the trouble. However, the red stamp is not a product, but a kind of amulet. Even with that, it is was outrageous for people to make complaints aimed at the temples and shrines just for the purpose of collecting the stamp.

For foreigners who plan to visit Tokyo, why not visit some of the temples and shrines with your new knowledge of the rules and make your rounds while collecting the popular red stamps along the way?

But be careful, because if you purchase a book at a temple and try to get a stamp from a shrine in your temple book, some places may not let you get the stamp. It may be smart to purchase one book for temples and one book for shrines and keep them separate. In recent years, kits that allow you to make homemade red stamps are sold on-line, so if you are a foreigner who wants to make your own stamp, purchase a kit on-line.

In this edition, we have given you the details about the differences between temples and shrines and useful knowledge that you should know before visiting Tokyo. You have learned that a Buddha statue and priests are at temples and a shrine is where you will find the gate "torii" entrance and where the Japanese God resides.

We hope that you can make your stay in Tokyo more enjoyable and exciting by referring to the contents introduced in this story and expand your knowledge about something that even Japanese people don't readily know.

Can you overcome your weaknesses before living in Tokyo? These are some of the difficulties with Japanese for foreigners.
Autumn has come to Tokyo! A summary of autumn knowledge and the wonderful four seasons of Japan for foreigners